BARELY 24 hours after the presidency announced the reconstitution of the reconciliatory committee for the All Progressives Congress, APC, lead by Chief Bisi Akande, an explosion has rocked the private residence of the factional Edo State Secretary of the party, Lawrence Okah. 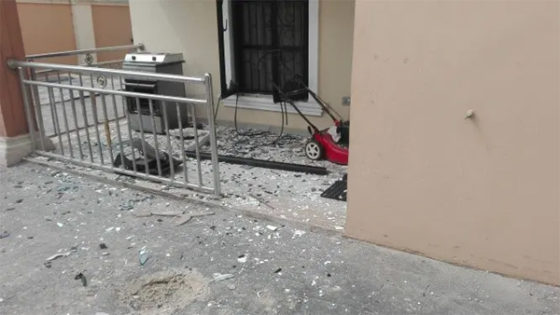 BARELY 24 hours after the presidency announced the reconstitution of the reconciliatory committee for the All Progressives Congress, APC, led by Chief Bisi Akande, an explosion has rocked the private residence of the factional Edo State Secretary of the party, Lawrence Okah.

The explosion which was said to have occurred around 12:30 a.m. shattered windows, destroyed part of the house’s roof, and left a crater on the spot where the explosion occurred while a second one which did not detonate was recovered by police from the anti-bomb unit.

He said members of the APC who were opposed to the second term bid of Obaseki have been targeted for attacks.

But Obaseki said the resort to violence was the stock in trade of Pastor Osagie Ize-Iyamu, National Chairman of APC, Mr Adams Oshiomhole and their cohorts in Edo Peoples Movement, EPM.

Obaseki also called on the Presidency and the Inspector General of Police, IGP, to call Oshiomhole, Ize-Iyamu and their cohorts in EPM to order so that the destructive descent to violence does not erode the good legacies that had been built over the years by the APC in Edo State.

Okah, while speaking on the attack,  said,  “On Tuesday last week, I heard gunshots. They shot at my bedroom. The police came and picked 52 bullets from my house

“And again on Tuesday at 12:30 a.m. (yesterday), I heard a sound, a boom. I called my security men and they said it sounded like a bomb. The one they threw into my bedroom did not detonate. If that one had detonated, you would not have seen me to talk to.

“That was targeted at my room. If it had exploded, it would have been a different story. I just want to advise Mr Governor. He has threatened me before and he has carried out the threat.

“By the grace of God, we are alive to speak to our people to let them know what is going on. We pray to God for those we helped not to turn around against us. By the grace of God, I am one of those that helped this government to be but the governor has turned around now and wants to kill us.”

Obaseki who spoke through his Special Adviser on Media and Communication Strategy, Mr Crusoe Osagie, said the state chapter of the APC was peaceful until the EPM and its enablers commenced their nefarious activities across the state.

He said, “We are quite flustered that Oshiomhole has not been able to rein in his people in the face of the reconstitution of the APC National Reconciliation Committee, tasked to restore lasting peace in the party both in the state and across the country. We are committed to peace and will do things right thing for the people of Edo State by continually supporting all credible means to arrive at lasting peace in the state.

Obaseki called on the Presidency and the IGP to call  Oshiomhole, Pastor Ize-Iyamu, and their cohorts in the EPM to order so that the destructive descent to violence does not erode the good legacies that had been built over the years by the APC in Edo State.

Edo State police spokesman, Chidi Nwabuzor, could not be reached for comments at press time.

Meanwhile, Pastor Ize-Iyamu, who was present at Okah’s residence alongside former Deputy Governor, Dr Pius Odubu, Henry Idahagbon, Patrick Obahiagbon and other personalities, yesterday said, Obaseki and his Deputy, Philip Shaibu must not kill to get the second term.

He also expressed shock that police were yet to make any arrest after several attacks on members and leaders of the party.

He said: “They went to Chief Inegbeki’s house and threw bomb there. Who will go and throw a bomb in his own house because he wants to do mischief? Chief Inegbeneki offence was that he was coordinating a rally in his hometown in Irrua. Lawrence Okah has been the subject of a lot of attack and attention.

“Some days ago, he reported that gunmen shot at his house. If not for the grace of God, the people living here would have been killed. If they had been killed, would Godwin Obaseki and Philip Shaibu had told us everybody should go and mind their casualties. Enough is enough.

“We have been talking peace to our people but if they begin to think that immunity is a license to kill, they will be mistaken. They need to be very careful. This thing must stop.

“People like us have tried to engage them and all we got was an insult. Our desire for peace is not a sign of weakness. This rubbish must stop. They must call their people to order. This is not the work of robbers. Armed robbers cannot throw a bomb and walk away. This was politically motivated. Lawrence Okah is Secretary of this party. You cannot force him to do your bidding. If you want him to work for you, you must submit yourself to the party.

“We will continue to call our people to maintain peace. If we want to retaliate, this city will be turned into a war zone. It is time the security agencies start to make arrests.

“We appeal to the police not to wait for people to die before they realised the matter is serious. They have used guns, now they are using bombs. We don’t know what next they will use.”

ELDERS from the North have disagreed with President Muhammadu Buhari on the raging feud between Governor Abdullahi Ganduje of Kano State and the Emir of Kano, Mohammed Sanusi. 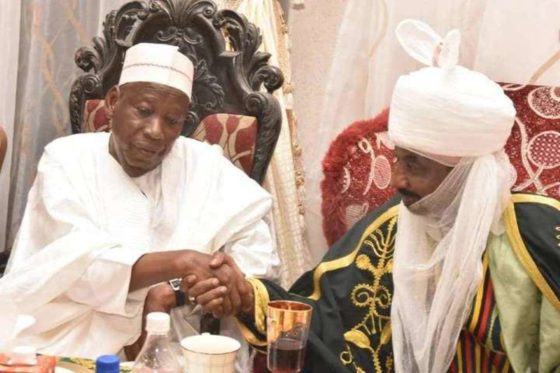