Boko Haram leader, Abubakar Shekau, has mocked the Chief of Army Staff, Lt. General Tukur Buratai, for saying the insurgents had been defeated.

*As Senate urges Army to set up base at Auno

Boko Haram leader, Abubakar Shekau, has mocked the Chief of Army Staff, Lt. General Tukur Buratai, for saying the insurgents had been defeated.

Recall that Buratai said the military had won the war against insurgency as the Boko Haram terrorists do not control any territory in Nigeria.

However, Shekau dismissed his claim, insisting that the insurgents had the upper hand in the war.

He said: “Buratai, I am addressing you in your own language; I am speaking your language, but you may not understand it. You claim you have defeated us, but it is a lie. You are a real liar.”

He also mocked followers of Ibraheem El-Zakzaky, leader of the Islamic Movement in Nigeria, IMN, and the Tijjaniyya sect led by Dahiru Bauchi, stressing that the people of Kano and Kaduna were in trouble.

Shekau’s statements were contained in a video released 24 hours after President Muhammadu Buhari visited Borno over last Sunday’s killings at Auno, even as the Senate, Thursday, urged the Nigerian Army to set up a base at Auno to prevent a recurrence of the killings in the village.

Also, in the video, Shekau said for the remaining Chibok schoolgirls in his custody to be released, the Federal Government must release his men.

Recall that more than 100 of the 276 girls abducted from Government Secondary School, Chibok, Borno State, in 2014, have remained in Boko Haram custody.

Buhari stay away from Borno

In the video, Shekau also asked President Muhammadu Buhari not to return to Borno, saying the sect was fully on ground in the North-East, even as he threatened that the President would be attacked if he returned to Borno.

His words: “Buhari came to Maiduguri pretending to be a good man but he is not. He shouldn’t try to return to Maiduguri again.

“Buhari, fear your Creator. God said you don’t have up to a spider’s web. But you think you are a major general. I swear you are nothing… Buhari, I am talking to you; you’ll know no peace. Don’t come back to Maiduguri.

“Just go and sit down and think over my comments. And if u think I am the one disrupting your affairs, honestly I am not. You have deceived the people by telling them you are a just leader; carry on!

However, replying Shekau, Thursday, Defence Headquarters described him as a mere rat, who possessed no capacity to stand up to gallant troops of the Nigerian military.

Acting Director, Defence Information, Brigadier General Onyema Nwachukwu, noted in a statement that criminals such as the Boko Haram leader could not deter the resolve of the armed forces to flush them out of North-East.

He said: “The Armed Forces and security agencies are very keen to see that hostages held captive are rescued or released. Our mandate, however, is not to negotiate with terrorists.

“Shekau does not possess the capacity he arrogates to himself. That is the reason he is constantly on the run and hiding in holes like a rat, using innocent civilians as a human shield to surround and protect himself.

“Our troops are gallantly dominating the theatre of operation. Therefore, that criminal cannot deter our troops.”

Senate advocates military base at Auno

In another development, the Senate at its plenary in Abuja Thursday, urged the military authorities to establish a base at Auno, following last Sunday’s attack by Boko Haram terrorists.

Having condemned the attack in very strong terms, the lawmakers observed a minute’s silence in honour of the deceased and victims of the attacks.

It, thereafter, asked the military authorities to establish a base in Auno to intensify their efforts in the fight against insurgency in the North-East and instruct Defence Headquarters to set up a panel to investigate what transpired at Auno and find measures to forestall recurrence.

The Upper Chamber also asked the Federal Government to begin a process of rehabilitating the affected communities through the North-East Development Commission.

The Senate also in one of its resolutions, urged the Federal Government through NEMA and Ministry of Humanitarian Affairs to send relief materials to the families of those affected by the attacks.

Meanwhile, the Federal Government, Thursday pledged to support victims of Auno attack which claimed over 30 lives and caused large scale destruction of properties, including houses, shops and no fewer than 18 vehicles.

In the video, Shekau said the schoolgirls in the custody of Boko Haram would be set free if the Federal Government let go of the sect’s members currently in detention.

Thu Feb 13 , 2020
Sajid Javid quit as Britain’s finance minister on Thursday just weeks before the scheduled annual budget statement, in a shock move provoked by Prime Minister Boris Johnson’s attempts to shake up his cabinet after Brexit. The chancellor of the Exchequer said he had “no option but to resign” after Johnson offered to keep him … Continue reading British Minister Disagrees With PM Johnson, Resigns 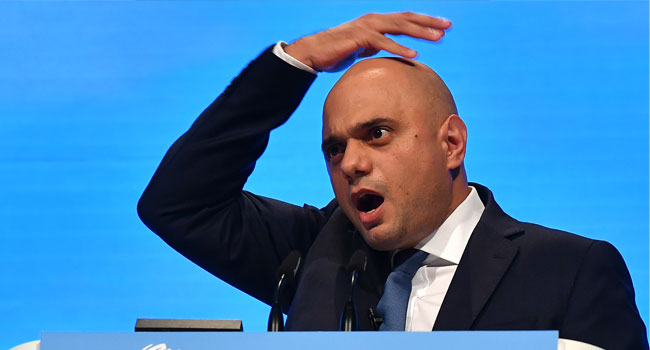